Many of us have heard of co-ops, but not many know what they are.

Co-operatives are membership-based business entities. They are owned, controlled and run by their members to realise their common economic and social objectives.

Co-operatives are successful businesses because:

• They are businesses with a social mission: they trade, work for a good cause, but reinvest and share their profits
• They are omnipresent: retail, healthcare, agriculture, service, credit, education, consumers ... and exist in almost every economic sector
• They strive for social cohesion and economic growth


Every co-op shares the same co-op values and principles. 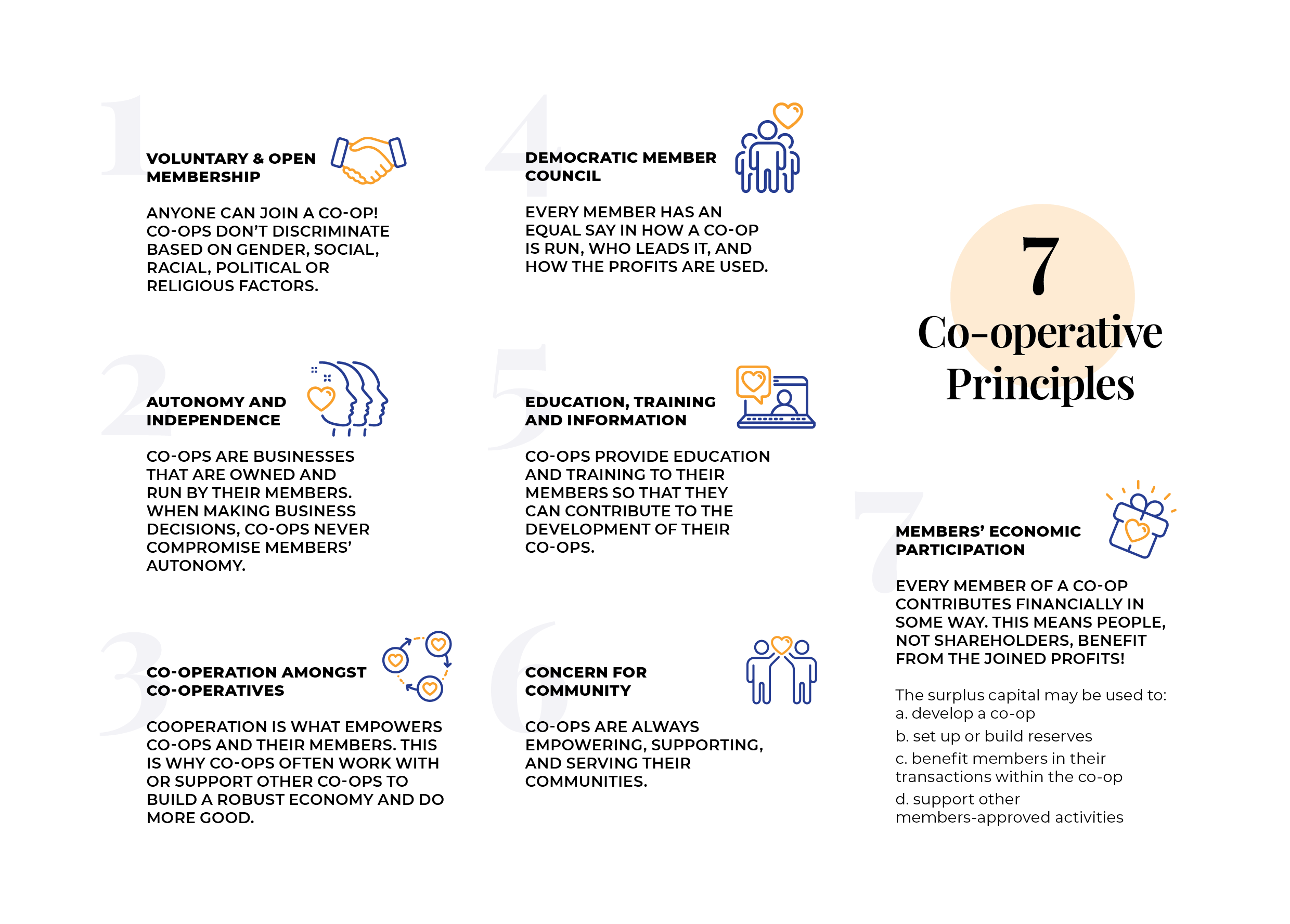 Between 1925 and 1940, more people began to see the usefulness of the co-operative concept of self-help and mutual assistance. Altogether 43 thrift and loan societies were formed to cater to the needs of civil servants, teachers, custom officers as well as those working in the private sector.

On 18 September 1980, SNCF was formed as the apex body of the co-operative movement. The Singapore National Co-operative Union assumed its new role as Singapore Amalgamated Services Co-operative Organisation Ltd in 1982 and became an affiliate of SNCF.

SNCF believes that Singaporeans can make the greatest difference to society and serve the rest of the community through the Co-operative Movement. With a base of more than 1.4 million people, one in three working Singaporeans is a member of a Co-operative Enterprise.

Credit Co-operatives, or Thrift and loan societies, are co-operatives that encourage thrift by accepting deposits from members and assisting members with loans on reasonable terms. A thrift and loan society is an association of persons who are grappling with the same economic challenges and who join together on a basis of equal rights and obligations through a democratically controlled enterprise.

Majority of the credit co-operatives are work-based where employees of the organisation are recruited as members of the co-operative. As a form of staff benefits, organizations offer check-off system, which enable deductions of staff monthly salaries for contributions towards their subscription accounts and loan repayments with their co-operatives.

Today, credit co-operatives play an important role in upgrading the economic and social status of their members.

Objectives of the Credit Co-operatives

∙ Prevent permanent indebtedness of its members by enabling them to obtain loans on reasonable terms. Different types of loans are offered to members: personal loan, education loan, housing loan and travel loan;

∙ Assist members to reduce the cost of living and improve their economic needs.

These co-ops, formed by the National Trades Union Congress (NTUC), strive to harness its gamut of social enterprises to do good and meet the pressing social needs in areas like health and eldercare, childcare, daily essentials, cooked food and financial services. They are formed by the Labour Movement with the primary purpose of serving workers and their families.

This Sector consists of co-operatives providing a wide range of services to their members. The types of services provided include environmental services, security, travel, aged care, management corporation and welfare. While business driven, service co-ops are anchored in their social mission to help Singaporeans and residents moderate the cost of living in Singapore.

Campus co-ops operate on the campuses of schools, colleges, polytechnics, and universities. Through mentorships by teachers, campus co-ops offer students first-hand experience at running a social enterprise on economic and co-operative principles.

Open to students, teachers, lecturers and staff of campuses based in Singapore, these co-ops provide a variety of services to their members such as the sale of books, stationery, IT services, sports goods, canteen services, travel and more.

Objectives of the Campus Co-operatives

Campus Co-operative as a co-curricular activity

The educational values and experience gained by the students are recognised by the Ministry of Education. The Ministry has in fact endorsed the students' participation in campus co-op as a Co-Curricular Activity (CCA). Students who are involved in this activity can qualify for bonus points in the CCA Grading Scheme. The Education Ministry has also left the formation of such co-operatives to schools and colleges.